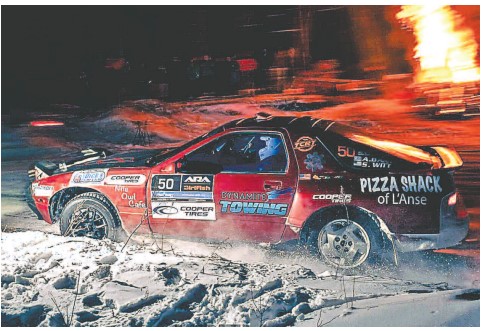 SNOW DOUGHNUTS–Giving a thrill to the crowd at the spectator area during the Sno*Drift National Rally in Atlanta, MI, Al Dantes and his classic Mazda RX-7, #50, ‘Rexine,’ stop on the hairpin and whip a doughnut for the rowdy bunch. Photo credit Ben Fuller.

After crossing the finish line at the Show Me Rally in Potosi, MO, last season and celebrating his win for the title of 2021 American Rally Association East Division Open 2WD Driver Champion, well-known local rally driver Al Dantes of L’Anse has yet to put on the brakes, getting back behind the wheel for three different events so far this season. Dantes and his team were elated to take home the hard-won honor after last season’s title win and
are back at it again and looking good in the standings so far this year. His first event for this season was in December at the Nemadji Trail Rally in Duquette, MN, where Dantes noted the weather was cold and super dry. To read more, subscribe to the L’Anse Sentinel online, or buy a print copy at our local retailers.

Eilola is new county board chairman

Eilola is new county board chairman